The next step of this constitutional “journey” starts with the top job – head of state.

I’ll be looking into the possible powers and role of a head of state in Part VII.

With an expectation that I’m going to get some blowback for this particular piece, for the record this isn’t my personal favoured option – I’m a republican on principle but retaining the monarchy wouldn’t necessarily be a deal-breaker if it meant Wales becoming independent in the first place. It’s worth reminding everyone that it took Ireland 27 years to go from a crown dominion to a republic.

Top 3 Arguments for a Constitutional Monarchy

Prestige & Pomp – Many people like a jolly and many people like the ceremonial aspects of the monarchy. It’s nobody’s place to decide what things people can or can’t like when it comes to state events. The ceremony and traditions around monarchy can boost tourism and national pride, in addition to being a fairly good example of “soft power” in international diplomacy. Monarchs are usually afforded much higher courtesies than presidents.

A figurehead who would build up decades of experience – Republicans tend to look at monarchy through the prism of democratic mandates and privilege but Elizabeth II/Liz Mountbatten-Windsor, while she can’t move about like she used to, is probably the most well-travelled and experienced diplomat the world has ever known. Even the minor royals build connections and influence (heh) that politicians might usually lose after they leave office. That counts for something.

“L’état, c’est moi” – A hereditary monarchy gives a sense of continuity through generations, providing a nation with a link to its past. It also provides an element of consistency without the baggage associated with absolute rulers in totalitarian states – that Louis XIV quote can be interpreted in different ways. Knowing that there’s someone above politicians and politics “to keep them in line” is also an advantage. Despite the association of monarchy with privilege and inequality, many of the nations in Europe which retain a monarchy are generally considered to be progressive or world-leading by those looking in from the outside (i.e. Norway, Denmark, Sweden and the Netherlands).

Top 3 Arguments against a Constitutional Monarchy

It’s blatantly undemocratic and entrenches privilege – This goes without saying. Relying on genes to select your rulers in the 21st Century is asking for trouble. The days of absolute deference to titles are largely gone – as we’ve seen recently with thePaedophile’s Friend scandal. There’s the well-trodden argument of hypocrisy too; people scream blue bloody murder at working people claiming universal credit, yet are happy to award one single family tens of millions of pounds of largesse a year because of who their ancestors were.

The monarch restricts who can become head of state – The head of state of the UK will, barring a sudden change in circumstances, be a white protestant from the landed gentry. While it’s technically true that pretty much anybody can become the far more powerful head of government (Prime Minister), having a position based entirely on genes ends up becoming the example for society as a whole and doesn’t send out the best message on equal opportunities or class. Even when monarchies are reformed in some way (like scrapping male primogeniture) or cut down to size as in some European nations it’s still a very exclusive club.

The role itself is functionally useless and comes at a high price (personal and financial) – The very idea of monarchy is cruel; they can’t have any normal relationships (because everyone wants something), they’ve largely lost all of the powers they once had, since the early 20th century they live in a media goldfish bowl and they can’t express their views in the same way as the rest of us. Yes, it’s in exchange for a life of extraordinary privilege at taxpayers’ expense, but Liz is still working long after the rest of us would’ve otherwise retired and probably died. I don’t see that as some sort of applause-worthy achievement, but the state torturing an elderly woman (and Chuck is no spring chicken either) because of a misplaced sense of duty and tradition. 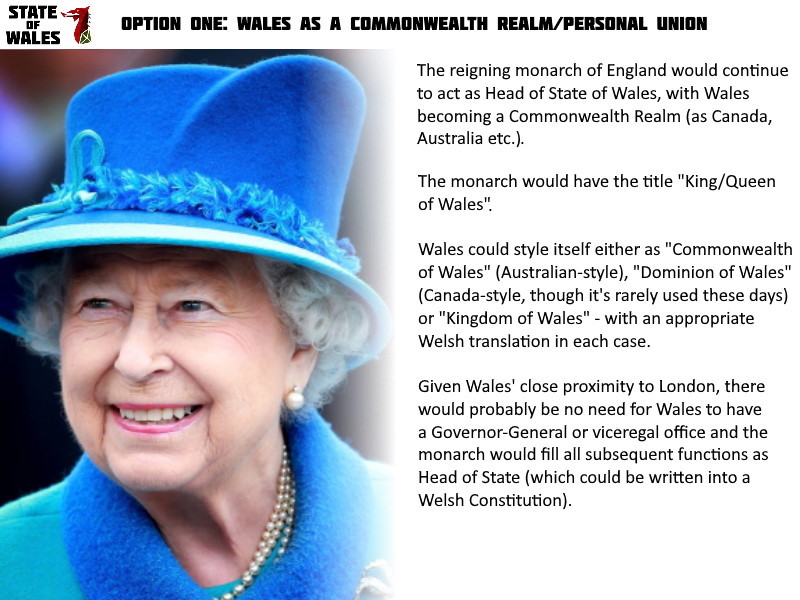 The biggest thing going for this option is – whisper it quietly – the monarchy enjoys a fair bit of support in Wales.

In an ITV poll earlier in 2020, 46% of people said that Wales should retain the monarchy after independence, compared to 29% who supported an elected head of state (Part IVb, Part IVc). This isn’t outright majority support, but presumably once don’t knows are removed it’s 61% in favour. Hardcore republican nationalists have their work cut out.

Now, that may be down to the personal popularity of Liz and might not necessarily apply to her successors – support for a monarch might not translate into support for monarchy. That said, retaining the monarchy is probably the most likely outcome and the role of the monarch can still be written into a Welsh Constitution fairly easily. It would be largely business as usual, albeit with some practical consequences which I come back to later. 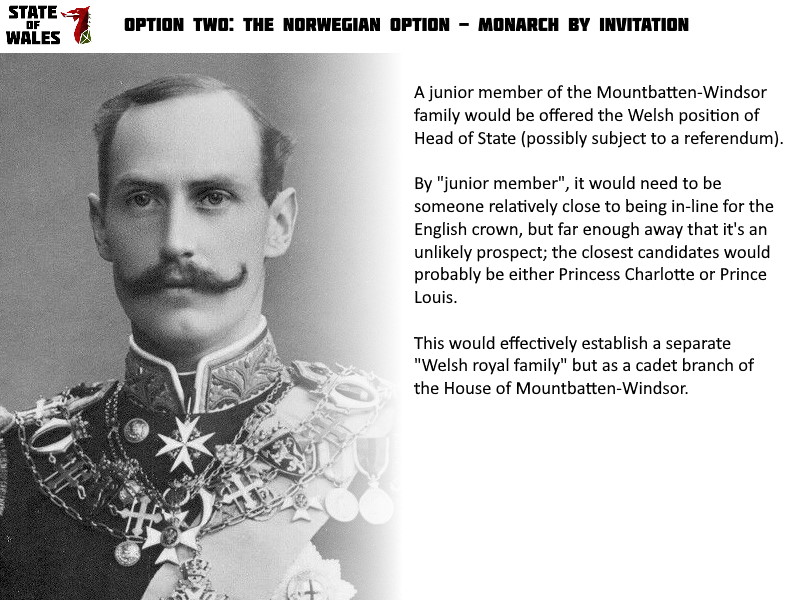 In 1905, a Union between Norway and Sweden was dissolved after the Norwegian Parliament decided Sweden – specifically the King of Sweden – had failed in their/his duties following a row over diplomatic representation (quite pertinent considering some of the stuff surrounding Welsh involvement, or lack of, in Brexit negotiations).

Afterwards, Norway offered the second son of the then Crown Prince of Denmark the Norwegian throne. The proposal was put to a referendum and Prince Carl took the Norwegian regnal title Haakon VII. 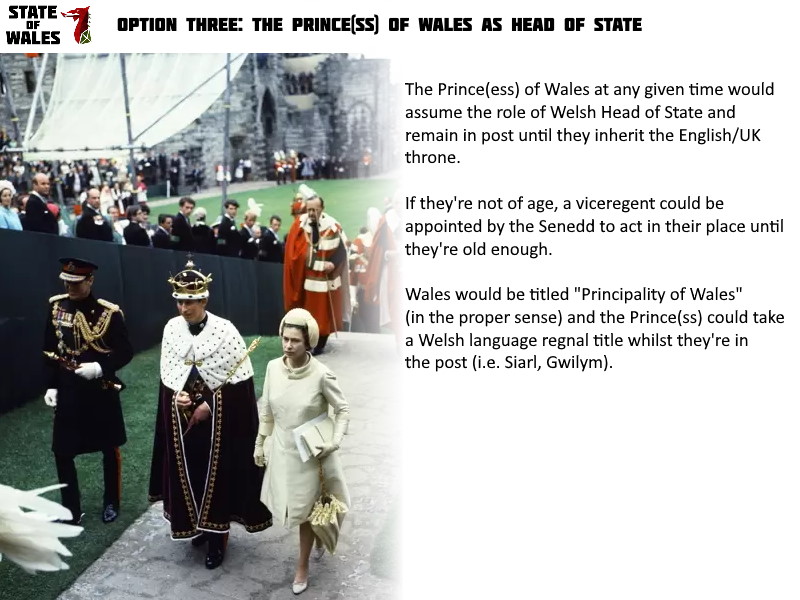 The advantages are that the title already enjoys some measure of worldwide recognition linked to Wales, we would get a head of state “in their prime working years” (so they’d probably always be aged between 40-70-ish) and it would maintain ties with the English royal family whilst maintaining a separate identity.

The obvious danger would be that it would be seen as a “lesser role”/practice run for the top job – which has its advantages and disadvantages. Many people would come to assume Wales is an English principality. 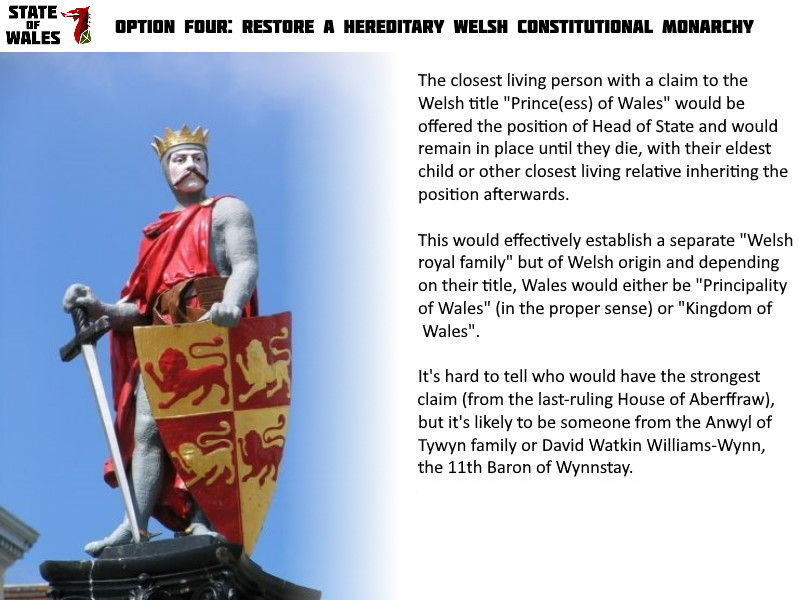 The main problem with this option is figuring out where you would start. Very few Welsh monarchs ruled the entirety of what we now call Wales. It was also such a long time ago that you could find incalculable numbers of people descended from the Welsh princes.

Some claims would be stronger than others, but we’d end up either handing the throne to a random aristocrat with no ambitions of starting a new monarchy, or for all intents and purposes an ordinary member of the public. However romantic the notion crowning a “Lost Prince(ss)” might sound, it’s probably a complete non-starter.

Practicalities of a (Welsh) Constitutional Monarchy

Ceremony – If Wales became a Commonwealth Realm, then there would be no need to have a Wales-specific ceremony/coronation for a new monarch (though some sort of formal statement that they will “uphold the Constitution of Wales” would be appropriate). Under the other options, there would need to be some sort of formal ceremony/investiture. Coronations are religious ceremonies, so any Welsh ceremony would be pared-back and would likely resemble the investiture/inauguration ceremonies in the Netherlands and Spain.

Money & The Crown Estate – Wales might not need to contribute to the costs of the Royal Household as a Commonwealth Realm other than security and other costs relating to visits (as in Canada, Australia etc.). The cost of things like state visits may be funded from central government funds.

In situations where the monarch is a permanent resident of Wales, then we probably would have to pay them (as we would with a president – Part Vb, PartVc). Based on the Sovereign Support Grant (Part II), proportionally it would likely be in the range of £2.2million a year – probably made up of a salary (for argument’s sake, around £150,000 a year – which is similar to the First Minister) and the rest being used to fund the office’s day-to-day activities. Presumably, what’s now the Crown Estate in Wales would remain as the Crown Estate if Wales became a Commonwealth Realm, with some other arrangement for the other outcomes (see also:  Independence Minutiae: The Crown Estate)

Official Residence? – Again, as a Commonwealth Realm there would be no real need for the monarch to have an official residence in Wales because we’re so geographically close to Windsor and London. An “official residence” may also only be used only for show – such as to host events  or as an office – and not be the place where the monarch actually lives. The same goes for all the other head of state options (Part IVb, Part IVc).

As for possible candidates, it’s likely to be a National Trust property, properties held in another type of trust or a stately home converted to a hotel/wedding venue and alike. Before considering any surveys or additional work that would need to be done, that could include (not an exhaustive list):

Royal anthem? – Believe me, I cringed when writing this but this is supposed to be about considering all possible options even though I might not necessarily agree with them.

The Royal Anthem in Commonwealth Realms is “God Save the Queen/King”, usually used for official state occasions only alongside the respective national anthem. If the Prince(ss) of Wales was Head of State it could be “God Bless the Prince of Wales” and if it were a restored or appointed Welsh monarch we could do away with it or use something else.

This article was originally published by stateofwales.com.