A Welsh Constitution IV (b): Head of State – Republic

After looking at possible options for a constitutional monarchy, it’s now time to turn to what’s probably the favoured head of state option amongst nationalists – a republic.

I’ll be looking into the possible powers and role of a head of state in Part VII.

Top 3 Arguments for a Republic

Democratic mandate – A basic principle in any democracy is that the people’s choice counts above all else and that includes choosing the head of state. The head of state in a republic (usually, but not always) has a mandate from the electorate, whether directly or indirectly. An elected mandate should make them more accountable. A republic wouldn’t make Wales ineligible for Commonwealth membership either; 31 member states are republics.

The head of state is more likely to be representative of the people – Monarchies are inherently out of kilter with modern values of equality of opportunity. In a republic, anyone from any background could theoretically become (or run to become) head of state. Monarchs command deference in political and socio-economic terms, while for presidents it’s often restricted to political terms only – it’s usually (but not always) a position based on personal qualities rather than class or ancestry.

Monarchies are outdated fairytales built on the blood and backs of others – Castles, palaces, princesses and princes; it’s all a bit Game of Thrones. Monarchies present an over-romanticised ideal of being supernaturally chosen, not a result of whom got knocked up by whom. Most if not all monarchies have generally got where they were/are because of historical violence and psychopathy at some point and switching to a republic may be a sign of social maturity. At least in a republic you have a choice of psychopath.

Top 3 Arguments against a Republic

“President Ego” – Probably the go-to argument against a republic, though it probably only holds water if you elect a president with executive powers (as in the United States, France, Brazil, Russia). It’s easy to think that a republic would result in the election of an intelligent, experienced leader who’s willing to listen to the people to ensure they remain in office. But there are countless examples of presidents who’ve abused their powers or disgraced their offices to the same extent or worse than any historical unelected tyrant. The public make crap choices sometimes. In some republics, there are hereditary political dynasties similar to those of monarchies but wielding genuine power (Clinton, Kennedy, Bush families) – a constitutional monarchy is more intellectually honest about this. Even in a ceremonial parliamentary republic, a president who shoots their mouth off would quickly become an embarrassment.

Politics in every place – From my experience, (party) politics often causes as many problems as it’s supposed to solve. Democracy doesn’t mean meritocracy and the “tyranny of the majority” often leads to bad decisions being made on our behalf based on equally bad advice and bad policies. There’s something to be said for the top position in the nation being apolitical in order to provide checks and balances on political power, but politicising it could lead to partisan squabbling and an inability to get anything done if the head of state and parliament respectively come from or are controlled by different parties.

The costs would be largely the same – People assume that a presidency would be cheaper to run than a monarchy, but that’s not necessarily true. All the official residences and grounds would still need to be maintained; the president and their staff, security etc. would still need to be paid for; events like inaugurations, state visits and funerals would come at a price. There may well be ways to do this cheaper at a Wales-only level, but I doubt it would save that much money overall. The only difference is it would be a constitutionally-mandated privilege, not inherited privilege. 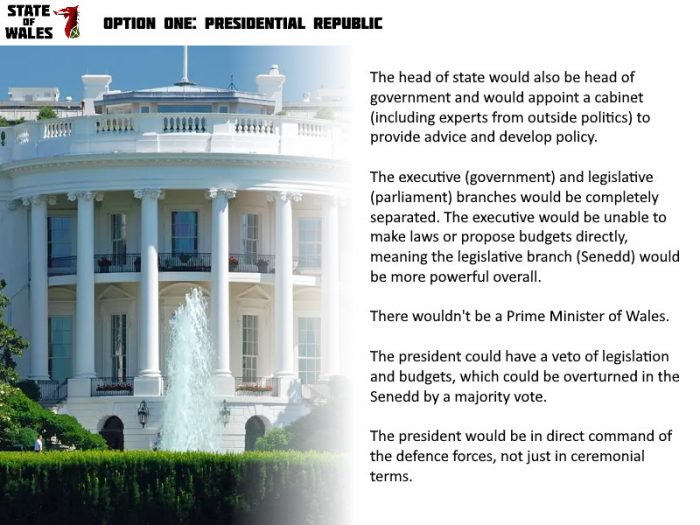 In terms of the advantages, with a clear separation of powers (Part VII) it would end the sort of confusion over what the Senedd does and what the Welsh Government (President) does. There would also be no ambiguity over the president’s mandate, which would provide an element of political stability for their term of office, while decisions could (arguably) be made more quickly from the president’s desk.

As for the disadvantages, placing a lot of executive power in one person’s hands could lend itself towards authoritarianism without the appropriate checks and balances being put in place. Also, disputes between the executive and legislative branches (if controlled by different parties – imagine a Conservative Welsh President and a Labour-run Senedd), could lead to a stalemate developing and an inability to get things done.

The sort of sudden changes in government that we’re used to in a parliamentary system would also go out the window as it would be far harder to change an executive president than a Prime Minister because you would probably have to change a large part of the civil service with each change in office-holder. There would likely need to be a Vice President on the election ticket (as in the US) to be first in line should anything happen to the President – the European practice is just to hold another election, though this may complicate term limits and alike. 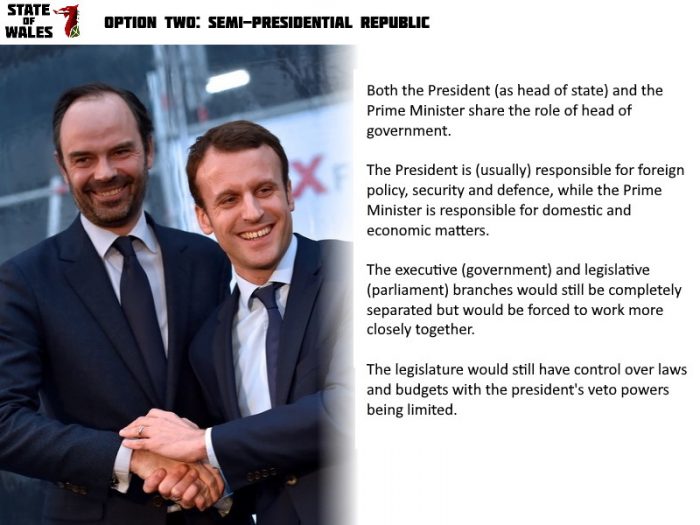 France, Poland and Russia are three examples of nations which use the semi-presidential system.

The semi-presidential system has more checks and balances than a presidential republic as the parliament and the Prime Minister retain significant control over policy-making. The problem is that it may be more confusing as it becomes difficult to determine where power truly lies, meaning prime ministers in this system end up becoming the “fall guy/girl” for a more powerful or domineering president (i.e. the Putin-Medvedev working relationship in Russia during the 2000s and 2010s).

When a president in a semi-presidential republic can’t guarantee the majority support of the parliament (i.e. controlled by different parties) then a system of “cohabitation” might develop. This means the President has to make decisions – that may or may not align with their own political beliefs – which have the support of the Prime Minister as well. This has happened several times in France. 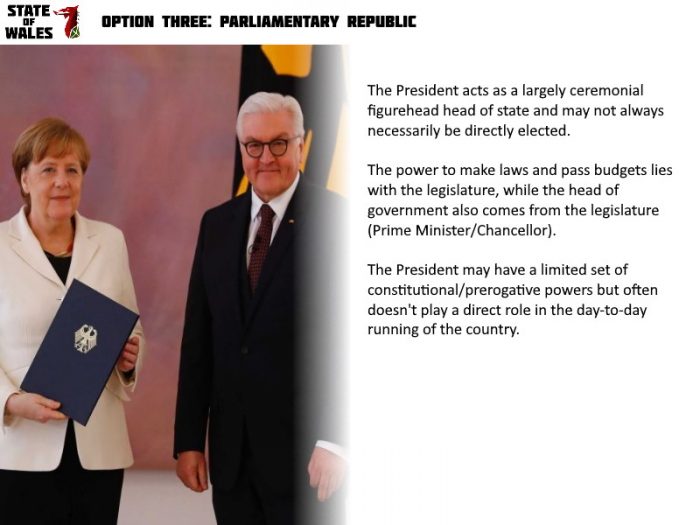 This is the most common form of republic, particularly in Europe.

Presidents in parliamentary republics are usually a dignified figurehead who may or may not have a long record of public service in some form; you get the impression that they tend to be older than presidents in presidential and semi-presidential republics but I don’t know if that’s truly the case.

Things would largely work as they do now, with the president holding some limited reserve powers relating to things like public appointments and mediation during political squabbles. The question would be, “What’s the point in going through the effort of electing or appointing a president without any real powers?”

What should the qualifications and nominations process be?

The candidates would likely need to be a Welsh citizen by birth (Part Vc).

If we choose a president with executive powers, then there may need to be even stricter requirements on age (perhaps a minimum age of 40) and possibly a requirement for prior political experience (meaning they can only be nominated from within the legislature or from a leadership position in a local authority). As mentioned, executive presidents usually have a nominated vice president elected alongside them too.

In a parliamentary republic, the conditions could be more relaxed and open as the position would be more ceremonial than hands-on.

The candidates should be serious. There would need to be a weeding-out process to ensure only candidates who can sustain a national-level election can go forward. This could mean securing a minimum number of nominations from the Senedd, resolutions passed by local authorities (i.e. a minimum of 10% of AMs or a fifth of local authorities), or an American-style system of primaries. Sitting presidents could nominate themselves.

How could we elect a president?

There are a few options:

As said, first-past-the-post can probably be discarded straight away in contests with more than two candidates. A parliamentary vote would save time, but risks being seen as an establishment stitch-up – though it could be used to fill a temporary vacancy (i.e. the time between the death and resignation of a sitting president and a new election).

The electoral college causes so many problems in the United States it’s not worth creating that kind of system here – though primaries for all candidates seeking office aren’t a bad idea. The two-round system is inefficient when you effectively get the same result from the single-round supplementary or alternative vote.

So the choice is probably down to supplementary vote and alternative vote (when there are more than two candidates), with the latter perhaps being the best overall because it guarantees the winner receives more than half of the vote.

Practicalities of a Republic

Titles & Style – In all cases the official name would be “Republic of Wales”. Presidents are usually titled “Their Excellency”. It’s debatable as to whether there would need to be a presidential anthem.

Term limits – A term limit is sensible. It’s just a matter of figuring out how many terms and how long each term would be. Most nations have a two-term limit. In presidential and semi-presidential republics, the term of office would presumably be shorter (perhaps four/five-year terms, in line with the Senedd). In a parliamentary republic, the terms could be longer (seven-year terms).

Timing of elections – Should presidential elections (if a direct election) take place at the same time as or in between Senedd elections? It would keep politicians at all levels on their toes knowing that they would have a much shorter window to make an impact, but it could also lead to the “cohabitation” problem touched on earlier (if the president has executive powers).

Attempting gender balance – There could be a requirement that each incoming head of state is the opposite gender of the preceding one. So if the first post-Constitution president is a man, the election after the sitting president’s term limit is up would be subject to an all-woman shortlist. There’s also the option of a collective leadership as in Switzerland – so you would vote for a ticket or a party list rather than a single person ( running a country by committee would be the Welshest-thing imaginable). If we had a Vice-President too, they could be required to be the opposite gender of the Presidential candidate.

Official Residence – Same issue as Part IVa; there would need to be an official residence, if perhaps only for show or to hold state events.

This article was originally published by stateofwales.com.