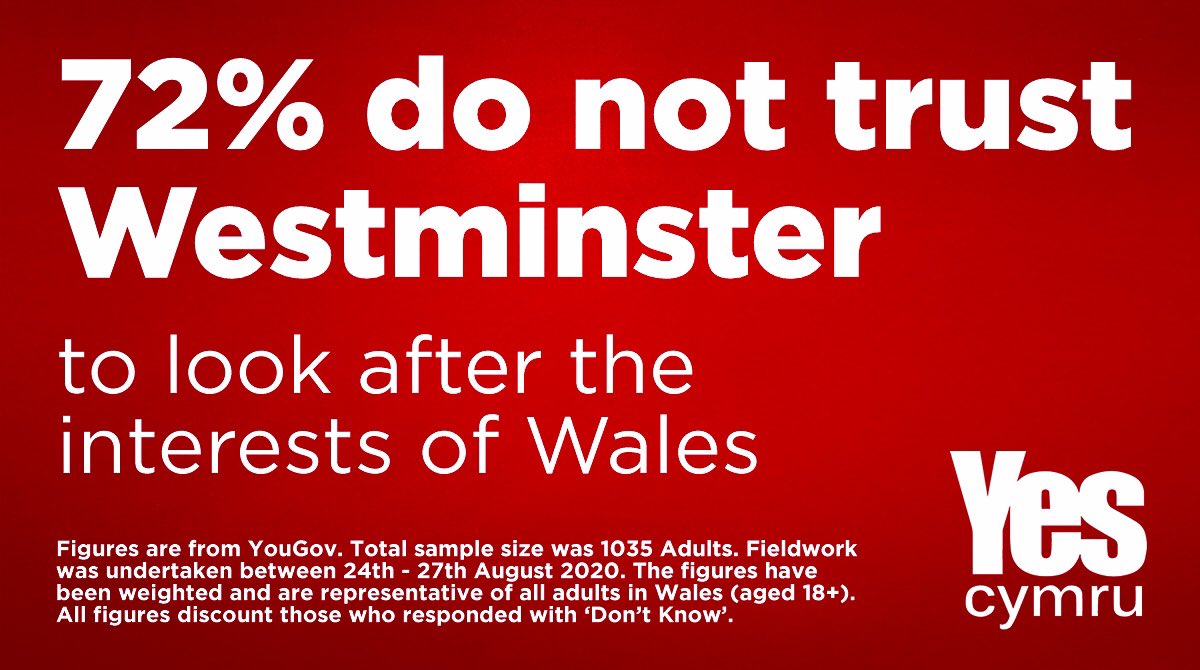 72% of the people of Wales do not trust Westminster to look after the best interests of Wales a new poll has found.

With all figures adjusted to remove ‘don’t knows’ there are some startling results for those who want the union to continue.

The poll carried out last week by YouGov on behalf of Yes Cymru – the campaign for an independent Wales – shows that 65% of respondents trust the Senedd (Welsh Parliament) to look after the interests of the people of Wales but only 28% trusted the UK parliament to do the same with 72% of respondents saying they do not trust the Westminster parliament.

There was also bad news for Boris Johnson when it came to his government’s handling of the Covid-19 crisis with 64% of respondents saying they felt the UK government had performed badly in response to the pandemic.

In contrast there was big support for the Welsh Government’s approach to Covid-19, with 78% saying that the Welsh government had done well.

“Trust in politics in general is very low, but nearly two thirds trust the Welsh parliament to look after the interests of the people of Wales. On the other hand only 28% trust the UK parliament. People in Wales are aghast at the shockingly inept British government and their callous incompetence.

“This crisis has really revealed the flaws in the British political system. Westminster governments don’t care about Wales. Why should they? No matter how we vote in Wales we end up with a government we didn't vote for.

“People are more aware than ever of the benefits of having the people of Wales run their own affairs. We have seen with Covid-19 that small independent nations, such as New Zeland, and also our neighbours the Republic of Ireland, can react quickly and efficiently to an international crisis. It's proven that being a small independent country isn't a disadvantage at all. Wales has done well, but people are starting to think, how much better could we have done as an independent nation?

"Since the start of the COVID-19 crisis, membership of YesCymru has tripled. People have seen that the Senedd - the Welsh Parliament - dealt with the crisis better once they stopped deferring to Westminster, and many people are starting to ask themselves, what else could Wales have done better had it not bowed down and faithfully followed Westminster? Support for independence is on the rise, and Boris Johnson’s disastrous government in London is a big force in driving that.”

“There are two striking aspects of the data released today from the yougov poll. The Welsh Government is seen to have responded well to the Coronavirus pandemic by supporters of all parties. The contrast couldn't be starker with the UK Government that is rated poorly generally, including by a significant minority of Conservative supporters. We also find that voters of all parties trust the Welsh Parliament generally to look after the interests of Wales - the same is far from true of the UK Parliament with Labour voters taking a particularly dim view of Westminster's trustworthiness.”

QUESTION 1: How well or badly do you think each of the following have handled the Coronavirus pandemic?

QUESTION 2: How much do you trust each of the following, if at all, to look after the interests of the people of Wales?