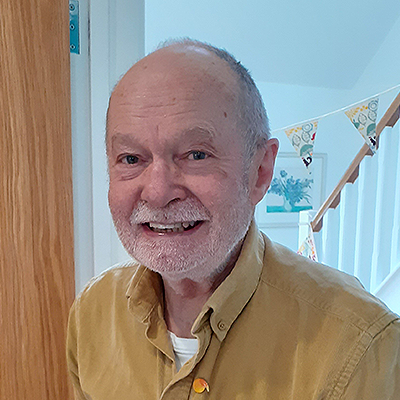 Candidate for Mid and West Wales

I was born in Port Talbot and attended local schools including Glanafan Comprehensive School. I went from Glanafan to college in Swansea to study biology. After graduating I went to college in Cheltenham to train as a teacher. I did not enter the teaching profession but I joined Gloucestershire police. I was a police officer for seven years. My time in the police taught me to deal with all types of people and also gave me a basic understanding of the law and justice system.

I left the police to train as a television engineer in Cardiff. I worked in Cardiff for seven years for a national domestic electronics company, Currys which became Dixons. I was employed in the workshop in Cardiff and became the shop steward for the EEPTU. During this period I met my wife and we married. I joined Plaid Cymru whilst living in Cardiff.

My wife was born and raised in Penrhiwllan near Newcastle Emlyn and in the early nineties, we moved to Mynachlog-ddu. I transferred from the Cardiff workshop to work as a field service engineer covering west and mid Wales for the service branch of Dixons called Mastercare.

At the time Ron Davies was leading the Labour Party and clearly championing the cause of devolution and I saw this as a step towards independence. Independence for Wales has always been my main aim in politics. I joined the Labour Party and was active with them for many years. I was Chairman (President) of the Labour Party constituency committee in Preseli for two years. When Ron Davies resigned I stayed in the Labour Party until it became clear that Tony Blair was not going to drive the devolution agenda forward. At that time Plaid Cymru seemed to be making progress and as they were seeking independence I joined Plaid Cymru. I was active with Plaid for over fifteen years, I have been an agent for Plaid candidates in Assembly elections in Cardiff and Parliament in London. I stood as a candidate for Pembrokeshire County Council in the name of Plaid Cymru on several occasions.

When YesCymru was established with the sole purpose of campaigning for Welsh independence it was exactly what I wanted. I do not regard myself as being on the right or left of politics but I sincerely believe that if we do not become an independent country then we will be absorbed into a political entity in which we will eventually lose our identity as a nation. I believe that it was this idea which inspired so many people to march with YesCymru in Caernarfon, Merthyr and Cardiff. The arguments for independence are both economic and emotional. As we go about our everyday lives we do not usually ponder the idea that we are a nation but there are occasions when it comes to the fore. In sporting occasions for example. I went to the Arms Park to watch Wales and England play rugby two years ago with my English friend. That day Wales won and as we left my friend said in an unusually  serious voice “I envy you Welsh.” I said “Come on, it's only a game.” and he replied “It's not the result of the game. It's because you Welsh know who you are.” I believe what he said is true, we know who we are.

I believe that YesCymru must campaign for independence only and I trust the people of Wales to run their country as they see fit after independence.What unites us all as an organisation is the desire to become independent Welsh citizens. To achieve the goal we need the support of over fifty per cent of our countrymen voting for independence. We need to attract support from across the country and people of all political persuasions.

The new Board will face many challenges. The last nine months have shown there is an urgent need to sort out some basic problems. For example, I have recently discovered that the record of members in Nation Builder has errors that affect my ability as YesPreseli group secretary to communicate with our members. These errors hamper any attempt to organise effectively for meetings or demonstrations. If I were lucky enough to be elected director, one of my priorities would be to overhaul the membership lists on Nation Builder.